Healing of the body the traditional way:

It’s hard to believe that just a generation ago, a Westerner suffering from a medical problem would never seek healing through acupuncture (acupuncturist). Rather, they would consult the family doctor and, perhaps, an allopathic specialist. Today people can choose from among a plethora of treatments that extend beyond the bounds of conventional medicine.

Acupuncture has been around longer than you think!

“Oriental Medicine,” which originated in China more than 5,000 years ago, is increasingly growing in popularity in the West sometimes as a “alternative” or in “conjunction” with other methods thanks in large part to its proven track record.  At first glance, the treatments that belong under the heading of oriental medicine acupuncture, acupressure, Chinese herbal medicine, Qi gong may seem exotic and mind boggling, however…

At a time when Western civilization was still in its infancy, China had already developed this highly complex and effective medical system. Though only known through the centuries to a small number of scholars, missionaries, and visitors to China, traditional Chinese medicine and its offshoots were, until recently, somewhat unknown and unavailable in the West.

It all changed when then President Richard Nixon’s widely publicized visit to China in 1973, ordinary North Americans were introduced to acupuncture and oriental medicine. Within a few decades, this profound healing art finally entered mainstream and has had a profound impact in the way we view the body and how we treat it ever since.

Today the National Institutes of Health fund research in Oriental Medicine, with more than 40 states licensing acupuncturists, and some insurance companies cover acupuncture services. Oriental Medical treatments, now available in conventional medical settings such as hospitals and community health centers, are used to treat an extensive range of conditions, some of which have been unresponsive to standard western methodologies.

Accredited colleges of acupuncture and Oriental Medicine continue to spring up around North America and abroad. And today we’ve grown accustomed to hearing a friend, coworker or acquaintance commenting on a recent visit to an acupuncturist. Despite the growing availability and acceptance of oriental medicine;

Too many people continue to suffer from illnesses and ailments, or undergo needless surgery, when acupuncture,  acupressure, and related treatments could just as effectively but gently return them back to health.

This situation points to a need for more knowledge about Oriental Medicine on the part of patients and their Western-trained physicians.

We are energy beings!

In the West we tend to think of ourselves only as physical beings. In actuality, we are energy beings that have attracted matter to give us form. This has been demonstrated with a specific type of photography called “Kirlian Photography” that shows the energetic field around living organisms.

When we think of ourselves as energy beings that attract matter, it’s easy to understand that dysfunction in our body’s flow of energy could then cause physical dysfunction. According to Traditional Chinese Medicine, there are pathways of energy in our bodies called meridians. When the energy (Chi) is flowing freely, we are healthy; when there is a disruption to the normal flow of energy, we manifest physical symptoms.

Traditional Chinese Medicine practitioners focus on the causes of disease/dysfunction in the body rather than only working to alleviate symptoms.

stimulate specific points along meridians, we can affect the flow of energy in the body. When the energy flow is 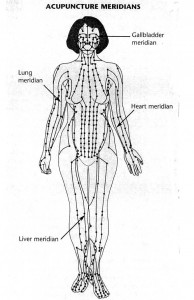